Thermal Imaging: The Best Way to Detect Moisture in Your Home or Business

Chad Vanvari
Mar 10, 2015 Blog Comments Off on Thermal Imaging: The Best Way to Detect Moisture in Your Home or Business

Thermal imaging may seem like something out of science fiction, but for home and business owners, this piece of space-age technology can prove to be very useful. It may not let you see through walls, but thermal imaging and moisture detection can save you hundreds, if not thousands of dollars, following a flood.

Anything above a temperature of absolute zero creates a heat signature. This means that by using a thermal imaging camera, a professional can detect 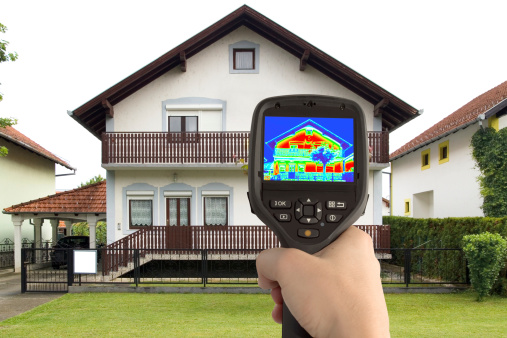 any unusual heat signatures. Thermal imaging cameras were originally highly expensive items that only government bodies and big businesses could afford, but over the last 45 years, as thermal imaging technology has improved, cameras have gone down in price. As a result, many flood services companies and even do-it-yourself individuals have this device as part of their tool set.

What It’s Used For

Thermal imaging can be used for a number of issues besides detecting moisture, such as finding leaks in plumbing and air ducts. And if your home or business has drafts, a technician with a thermal imaging camera can find the areas that require insulation.

And thermal imaging and moisture detection aren’t just for flooded basements. For instance, if your roof is leaking, they can be used to find afflicted areas and places where you will require insulation and mould removal; done early enough, mould can even be prevented before it forms!

Why You Should Use It

If your home or business has experienced a flood or a leaky roof, calling a flood services company that uses thermal imaging and moisture detection has many advantages. For starters, many organizations do not use thermal imaging technology, despite its obvious benefits.

A flood services company will also be able to quickly find areas that have been affected by moisture and take care of it before mould and other issues can arise. In addition, this saves you money on mould removal, as well as prevents the negative effect mould can have on your health, especially if anyone in the workplace or home suffers from asthma or other respiratory ailments.

What Happens During a Thermal Imaging Inspection

The technician will typically scan the walls of your home–they may even start outside–looking for any anomalies, such as heat being caused by mould or cold spots due to moisture. It is highly recommended that you call a professional to locate these issues, as they will know what to look for and the best course of action.

If your business or home has experienced a flood recently, call Flood Services Canada for the best thermal imaging and moisture detection services in the Greater Toronto Area. In addition to cleaning up following a flood, we will also use the latest thermal imaging technology to detect any moisture in your walls and perform efficient mould removal. Don’t tear apart your entire wall or roof; find the spots being affected by mould and Flood Services Canada will remove it in a targeted manner!