How to Tell if Your Pipes are Frozen or Have Burst

Chad Vanvari
Nov 15, 2016 Blog Comments Off on How to Tell if Your Pipes are Frozen or Have Burst 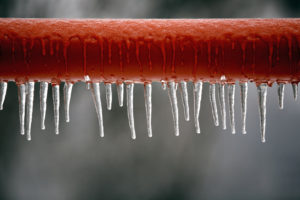 As any homeowner knows, having a frozen pipe burst and flood your home is one of the perpetual hazards of the winter season. Although preventive measures can and should be taken to keep your pipes from freezing, even the most proactive steps aren’t 100% effective. This is why it is important for homeowners to be aware of the signs that a pipe has frozen or burst. Having your home flooded by a burst or frozen pipe can be a disaster with the potential damage exceeding more conventional flooded basement scenarios, especially since your basement might not be the only place affected. Please use this guide to help yourself stay vigilant for the signs of frozen or burst pipes within your home so you can avert or minimize flooding damage.

Risk Factors of a Frozen Pipe

Interestingly, if your home is in a warmer climate that does not regularly see winter temperatures below zero degrees Celsius (32 degrees Fahrenheit), then your pipes may be more vulnerable to freezing and flooding. This is because pipes are designed for their expected conditions, and the pipes used in warmer climates will not have the same level or placement of insulation as pipes found in colder locales.

When a pipe is inside an interior wall, it is better insulated and protected from shifts in temperature. Pipes located along exterior walls either do not have this protection, or have much less of it, making them more vulnerable to freezing. This also applies to any pipes that are external to the wall, such as piping that runs under your sink.

Signs of a Frozen Pipe

There are not many signs that appear when a pipe has frozen, and the ones that do appear can be tricky to recognize depending on where the pipe is located. It is important to stay vigilant and watchful during cold weather so that you can act quickly in the event that you notice any of the following.

Pipes freeze because water freezes, and water won’t freeze until the pipe’s temperature drops to zero degrees Celsius (32 degrees Fahrenheit) or below. The temperature can fluctuate along the length of a pipe as it works its way through your home, so safe temperatures in one spot do not necessarily mean the entire line won’t freeze. You can buy special temperature trackers to install along key sections of piping (bends, etc.) that will deliver alerts if the temperatures drop to problematic levels.

The appearance of frost on the surface of the pipe can be a sign that freezing has occurred and may serve as a prelude to the frozen pipe bursting and potentially flooding your basement or home. Frost can only be confirmed by visual inspection, so this warning sign is mainly viable for locations like pipes under the sink. It is worth noting that frost does not necessarily mean the pipe has frozen; it only means that temperatures are low enough for freezing to occur. Still, spotting frost on your pipes should set off a number of red flags and prompt action to warm the pipe.

As ice builds up within the pipe, water will naturally be unable to pass through. This can result in a complete loss of water pressure or only a trickle being able to get through when you turn on the faucet.

Sometimes the amount of ice in the pipe doesn’t fully restrict water flow but prevents the necessary volume from passing through. In this scenario, you may hear a “whistling” noise. This phenomenon can be more common with pipes that carry water away from your home than to or through it, but it is not exclusive to them. Any unexplained whistling sounds from your pipes should be viewed with caution and suspicion.

Signs of a Burst Pipe

Images of a burst pipe commonly involve a home being flooded by gushing water, but this isn’t always the case. In fact, when brought on by a frozen pipe, burst pipes can be surprisingly subtle—at least at first. The reason for this shouldn’t be too surprising: When ice ruptures the structure of a pipe, it still poses an obstruction and will need to melt in order for more than trickles to seep out into your home. Fortunately, this means that if you can recognize the signs of a frozen burst pipe quickly, you can dramatically minimize the potential damage. Here’s what to watch out for.

Just as with a frozen pipe, a burst pipe can impair the ability for water to reach the faucet. Water pressure may be perpetually low under these conditions or alternatively it may be erratic or “spurting.”

As water seeps out of a burst pipe, it will begin flooding in the form of puddles and pooling around the site of the rupture. Depending on where the pipe is, this can be easy or hard to detect. Puddles appearing under your sink are much easier to recognize than puddles forming under the floor, in the walls, or in the ceiling, for instance. In these latter cases, be on the lookout for wet rings on the ceiling or strange damp patches in your drywall.

Most concerns about burst pipes involve your home flooding; in other words, water getting out. But burst pipes can allow unwanted materials to get into your home as well. If your water suddenly develops an odd taste, colour, or odor, then this may be a sign that either the ruptured pipe has started corroding or that outside contaminants have infiltrated the system.

Depending on where along the line the pipe has burst, it can behave similar to a clog. Under these conditions, you may experience recurrent backups, drain clogs, slow-flushing toilets, or other signs that outflow lines are being obstructed.

Should your preventative methods fail and your home becomes flooded by a frozen pipe bursting, timely action becomes critical. Contact professional water damage remediation specialists as soon as you can to minimize the impact of flooding and maximize how much damage can be prevented. Flood Services Canada’s quick-response teams of professional remediators will drain, dry, and save your property.