How Catastrophic Storm Surges Can Cause Flooding

Chad Vanvari
Jul 5, 2016 Blog Comments Off on How Catastrophic Storm Surges Can Cause Flooding

What is a Storm Surge? 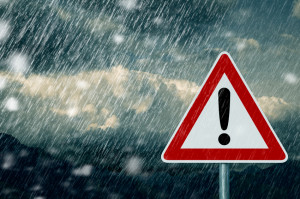 A “storm surge” is a phenomenon that can happen in coastal areas or anywhere that borders a large body of water, such as Lake Ontario or one of the other Great Lakes. During periods of high wind and air pressure, the water level will begin to rise and cause high waves. A storm surge is often seen during periods of high winds, hurricanes, nor’easters (storms or winds blowing from the Northeast), or intense winter storms and can happen within a fairly short amount of time.

How Do Storm Surges Cause Flooding?

The air pressure and winds that form over the water during a storm surge creates large waves, effectively driving up the water level. These waves can cause the lake to spill over into surrounding, low-lying areas and cause significant flooding. The likelihood of this happening goes up significantly if the storm surge occurs at the same time as high tide.

Flooding from a storm surge does not have to be from the lake or ocean directly. The storm surge may cause connecting rivers to flood, or it can combine with any river flooding already being caused by the same storm.

What Kind of Flood Damage Can a Storm Surge Cause?

How to Protect Yourself from a Storm Surge

The good news is that any weather phenomenon capable of causing a storm surge is going to get noticed by meteorologists in advance. This will give you some advanced notice so that you can take certain preventative steps to minimize potential damage to your property.

Storm surges are capable of causing catastrophic flood damage to your property. If you find yourself in this situation, fast, professional action is your best response. Flood Services Canada is a leading quick-response remediation service that operates within the Toronto, Oakville, Oshawa, Ajax, Whitby, Georgina, Barrie, Mississauga, and Lakeshore areas. We stand ready 24/7 to provide the best techniques, personnel, and technology to ensure your home or business is clean, safe, dry, and documented as soon as possible.