What Are the Causes of Riverine Flooding? 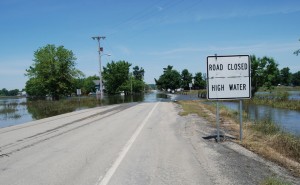 Riverine flooding is another way of describing a river flood. In this type of flooding situation, a river’s water level swells to the point where it overruns the banks and has the potential to threaten the immediate area. Depending on where the river is located, the damage could range from flooded roads to deluged basements.

There is no single definition of “flash flood,” but the term generally refers to a sudden flooding event caused by a storm that rapidly raises the water level of a river. The word “flash” refers to the short amount of time between the start of the flood and when it reaches its peak level. Flash flooding is of particular concern in urban areas where pavement and a lack of vegetation render most of the ground impermeable to water, prolonging drainage times.

An alluvial fan is a deposit of rock and soil that erodes from mountainsides and accumulates along valley floors in rough, fan-shaped arrangements. As rain runs down the valley, it brings debris down along with it and fills the channels of the fan. The water splits off and forms new channels in a repeating process that creates erosion and flooding over a wide area.

Ice jam flooding is similar to flash flooding in that it results in a rapid rise in water levels. An ice jam is most likely to occur during the spring thaw when melting snow and rainfall break up winter ice into large, floating masses. This creates free-flow conditions and can cause water levels to rise remarkably quickly.

The transition from “extra water” to “flood level” is not a hard-and-fast rule. How easily any given river floods depends on its size and the surrounding geography. A river on a flat and open area, for instance, may spill over occasionally and leave long-standing pools of flood water that won’t drain away. This means that flooding in such an environment could build up over time without necessarily needing a single dramatic weather event. Large rivers tend to flood only after periods of prolonged rainfall and when combined with melting snow and ice, making flooding a more seasonal occurrence.

River levels are classified by varying stages as measured by a stream gauge. The exact level each stage occurs at will vary by the individual river.

The water level is near or slightly over its banks. This is the normal level for a river and any overflow is confined to a small area that does not threaten nearby structures.

The main threat from the minor flood stage is roads potentially getting flooded. Any nearby parklands or lawns may also get soaked, and some basements may be affected depending on the arrangement and grade of the property. Few buildings are expected to be flooded at this point, however.

This is when most buildings start getting affected. Road closures can be expected and in some cases, evacuations may even be warranted. Property damage is likely if appropriate precautions aren’t taken (and sometimes even if they are).

This is the worst-case scenario: catastrophic flooding capable of heavily submerging buildings or vehicles and forcing evacuations of large areas. The 2013 floods in Alberta are an example of this in action.

Flood Services Canada is a leading quick-response remediation service that operates within the Toronto, Oakville, Oshawa, Ajax, Whitby, Georgina, Barrie, Mississauga, and Lakeshore areas. We stand ready 24/7 to provide the best techniques, personnel, and technology to ensure your home or business is clean, safe, dry, and documented as soon as possible after all types of flooding.

Contact us at (416) 302-2107 to learn more about our flood remediation and storm damage restoration services, or use our emergency hotline at (416)-999-3930 to get our rapid-response teams deployed to your area.